The text that follows is owned by the site above referred.

From Wikipedia, the free encyclopedia 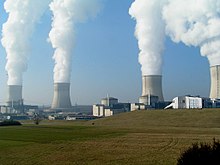 The Cattenom Nuclear Power Plant in France. France produces around three quarters of its electricity by nuclear power.[1] 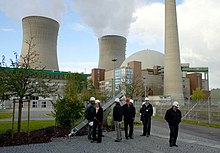 The Grafenrheinfeld Nuclear Power Plant in Germany. Chancellor Angela Merkel‘s coalition announced on 30 May 2011, that Germany’s 14 nuclear power stations will be shut down by 2022, in a policy reversal following Japan’s Fukushima Daiichi nuclear disaster.[2]

France has the largest share of electricity generated by nuclear power. China has the fastest growing nuclear power program with 28 new reactors under construction,[3] and a considerable number of new reactors are also being built in India, Russia and South Korea. At the same time, at least 100 older and smaller reactors will “most probably be closed over the next 10–15 years”.[4]

In 2010, before the Fukushima Daiichi nuclear disaster, it was reported that an average of about 10 nuclear reactors were expected to become operational per year, although according to the World Nuclear Association, of the 17 civilian reactors planned to become operational between 2007 and 2009, only five actually came on stream.[4] As of 2016, Italy closed all of its nuclear stations and Belgium, Germany, Spain, and Switzerland are phasing-out nuclear power while Netherlands, Sweden, and Taiwan have some same intentions. Lithuania and Kazakhstan shut down lone nuclear stations earlier but plan to built new ones instead. Armenia earlier shut down its lone nuclear plant but then started to utilize it again. Austria never started to utilize it s first nuclear plant that was completely built. Due to financial, politic and technical reasons, Cuba, Libya, North Korea, and Poland never completed the construction of their first nuclear plants (but the latter two plan the nuclear stations again) and Australia, Azerbaijan, Georgia, Ghana, Ireland, Kuwait, Oman, Peru, Singapore, and Venezuela never built their planned first nuclear plants.[5][6] Global nuclear electricity generation in 2012 was at its lowest level since 1999.[7][8]

As of 2011, countries such as Australia, Austria, Denmark, Greece, Ireland, Italy, Latvia, Liechtenstein, Luxembourg, Malaysia, Malta, New Zealand, Norway, Philippines, and Portugal have no nuclear power stations and remain opposed to them.[5][9]

Canadian Bruce Nuclear Generating Station is the largest nuclear power plant now whereas Japanese Kashiwazaki-Kariwa was regarded as such earlier.